“The Rings of Power” are here to fight climate change

Good news, trolls! If “The Rings of Power” didn’t give you enough fuel for the hate with its cast of color and female characters with an agency that aren’t sexually abused all the time, here’s something else to chew on. : the series seems terribly concerned about climate change.

Prime Video’s “Lord of the Rings” prequel is set thousands of years before the JRR Tolkien stories we know and love. One of the strengths of the new series is how it builds on existing lore while adding its own rich narratives. Like, if clever fanfiction was given a $500 million budget. The Southlands aren’t found specifically in Tolkien’s work, but in Episode 7, titled “The Eye,” “The Rings of Power” provides a pretty compelling origin story of how Mordor came to have its boom. . Most of the inhabitants of this world, except the evil ones, are concerned about the environment. They know something is wrong; they believe that is changing and unlike about 25% of Americans, they are ready to fight.

“The Rings of Power” follows several bands on disparate journeys destined to intersect. Elf hero Galadriel (Morfydd Clark) has given up her eternal reward because she can’t shake the unsettling feeling that evil has not been defeated. She’s right, of course, and leads the charge of human soldiers to save the day (at first) when a village in the Southlands is besieged by orcs, led by the dark schemer Adar (Joseph Mawle). Meanwhile, an elf who has a crush on her (isn’t everyone?), Elrond (Robert Aramayo), has rekindled his friendship with the dwarf prince Durin (Owain Arthur) and the two are making progress. on a forge. The ancestors of the Hobbits, known as the Harfoots, make their annual migration, assisted by the mysterious Stranger (Daniel Weyman) who happens to be quite tall and may or may not be really helpful.

Dylan Smith (Largo Brandyfoot), Markella Kavenagh (Elanor ‘Nori’ Brandyfoot) and Megan Richards (Poppy Proudfellow) in “The Lord of the Rings: The Rings of Power” (Ben Rothstein/Prime Video)Of all the groups, the Harfoots seem the most clearly earthbound. They make a living from it, living as foragers in a simple and difficult life where blackberries are delicacies and snails are eaten raw. They wear nature in their curly hair – tassel headbands, leaf fascinators, grass bonnets – and walk barefoot. Their migration, an essential part of their culture, is routed around what is edible in season. For this reason and because of past struggles, they know how to conserve. Main Harfoot Nori (Markella Kavenagh) scolds her friend Poppy (Megan Richards) for eating an apple when the trees looked exhausted the night before. Nori says as wisely as some trees do talk. If you know your Tolkien, you know she’s right.

You would think that a species that lives infinitely longer than everyone else would be preoccupied with destroying the world, and you’re right.

Elves might also be the group that comes to mind when you think of Tolkien’s creatures and the natural world. Their crowns are leaves. They are often seen wandering among groves of yellow birches. And the only thing that will save them? A precious metal known as mithril, which happens to be found in dwarven mines. The elves are in danger – specifically, the Light of the Eldar is fading – and according to legend, mithril is much like the shining power that would be the only thing that can restore them.

You would think that a species that lives infinitely longer than everyone else would be preoccupied with destroying the world, and you’re right. For elves and others, a yellow leaf from the Lindon tree serves as the litmus test, the canary (it’s the right color) in the coal mine on their shifting lands.

Nazanin Boniadi (Bronwyn) and Morfydd Clark (Galadriel) in ‘The Lord of the Rings: The Rings of Power’ (Courtesy of Prime Video)In “The Rings of Power”, the natural world dictates choices, a magic ball of 8 to decide. The white tree losing its flowers prompts the queen regent (Cynthia Addai-Robinson) to reconsider her decision and help Galadriel. A falling and corrupting yellow leaf with smoky darkness like ink injected into his veins causes the dwarf Durin and his wife Disa (the fantastic Sophia Nomvete) to cry out for Elrond to return. They will help him collect mithril, in secret. Characters in “The Rings of Power”? They pay attention. They also help. If real climate change were to happen in these fantasy lands, the characters would fare much better than those selfish assholes in Westeros. Or, us on Earth.

Evil first comes in the form of the destruction of nature.

Mining doesn’t seem particularly eco-friendly, but Dwarves are just as sensitive below ground as Elves and Harfoots are above. Their mining involves, as Disa explains, singing. Screenrant writes, “The dwarves use the resonance of their booming voices to detect where the mineral veins are in the mountain”, summing it up perfectly as sonar. But for Disa and the other dwarves, it’s even more interconnected than that. She sings in the mountains when several miners are trapped. They are eventually released. The mountains tell him where to dig, and especially for the preservation of nature and everyone’s way of life: “where to leave the mountain intact”.

Recent horror films have exploited, to put it very bluntly, the darkness of the extraction industry. 2021’s “The Devil Below” is set in an Appalachian town abandoned after a coal mine fire. 2020’s “Unearth” has the tagline: “A Fracking Horror Story.” Something also lurks in the dwarven mines and digging too deep, as the elves fly too close to the sun, taking too much will soon wake it up. 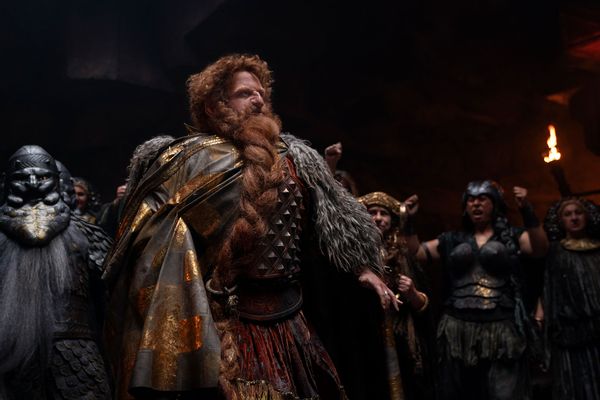 Owain Arthur (Prince Durin IV) in “The Lord of the Rings: Rings of Power” (Prime Video)But in Episode 6, we already had an environmental disaster in Middle-earth. The secret weapon, which the devious Waldreg (Geoff Morrell) with his bare-chested aprons apparently traded in, is a key. It turns into Sauron’s hillside, “Lost” style sanctuary and unleashes the Anduin River. The industrious and seemingly engineer orcs dug trenches, not only to surprise the townspeople, but also to hasten the course of the river. When the flooding river reaches a dormant volcano, which watches over the green lands, it creates a reaction. The dormant volcano is not so dormant anymore.

The land is changed forever, and much of Episode 7 finds characters walking in shock through an apocalyptic landscape: red skies as in a dust storm, falling ashes as from a forest fire. Evil first comes in the form of the destruction of nature, a delicate balance of life upset, setting off cataclysmic chain reactions, due to the work of man (and orc).

Sound familiar? This piece is bound to trigger a flurry of spam and DMs from weird men, who love to hate this show with its pixie and dwarf portrayed by actors of color, and its ass-kicking women. But as the trolls conveniently overlook essential female characters in Tolkien’s books – like Eowyn, who, when told by the Witch-King that he cannot be killed by a living man, states “But I am not a man living!” a slightly modified line for Peter Jackson’s film – they also ignore Tolkien’s love and concern for nature. He seeps into his work in loving descriptions of forests, from the woods of Lothlórien to Fangorn.

Part of the work of the orcs is to raze trees, to destroy nature in the service of evil industry which runs like a locomotive. The line from “The Two Towers,” which struck me as eerie as a childish bookworm, says, “There’s always smoke rising from Isengard these days.” And there is also still a climate emergency in our world today: a hundred-year flood, a hurricane, the smoke of more frequent and less distant fires. Our Earth doesn’t have Tolkien’s Middle-earth stewards, the wise and tragic Ents, those noble tree giants who tend to the woods, including walking and, as Nori knows, talking.

Want a daily recap of all the news and commentary Salon has to offer? Subscribe to our morning newsletter, Crash Course.

In the first episode of “The Rings of Power”, a scorching meteor bearing The Stranger streaked across the sky. All lands are linked, like all of nature, and the series has shown every group of characters gazing at the blazing trail in the dark: the Harfoots, the elves. In a green valley in a very small and beautiful moment, the trees also looked. They moved, stretched out branched arms to comfort each other. Trees know what’s coming, even though we still refuse to know.

“The Rings of Power” airs its season finale Friday, October 14 on Prime Video. Watch the trailer via YouTube.