Summertime global warming trends expected to continue in the United States, along with droughts and fires in the West 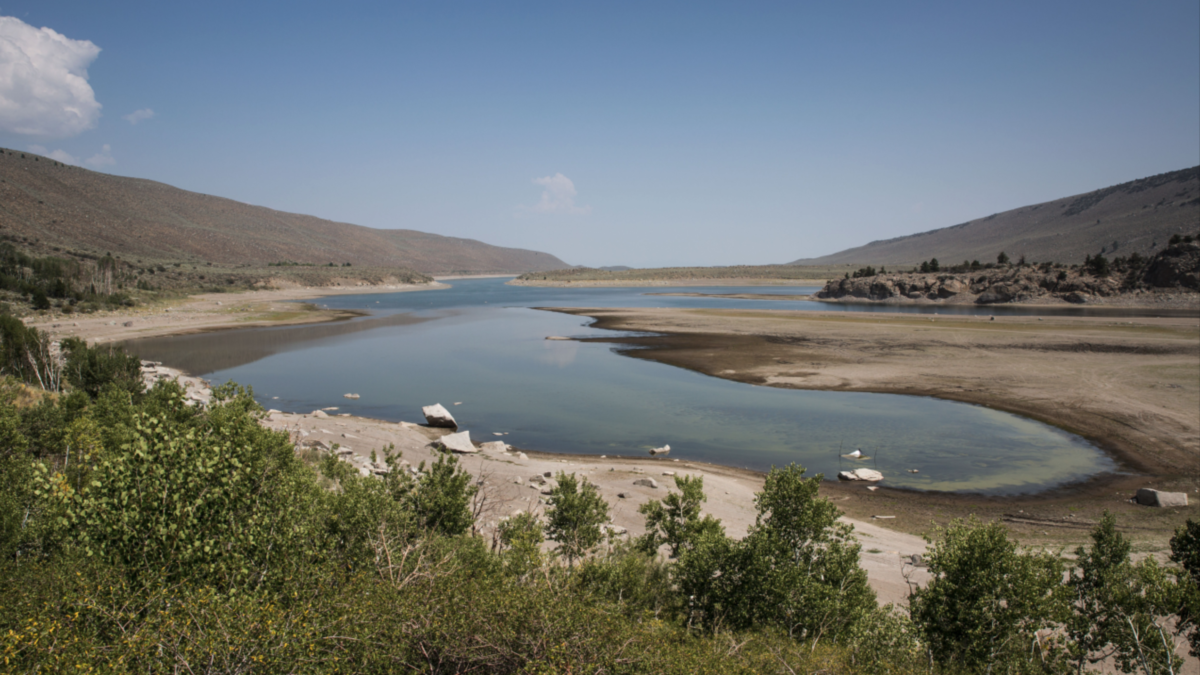 California’s Lake Grant, controlled by the Los Angeles Department of Water and Power, appears to be nearly empty on August 13, 2021: NAJ screenshot

WASHINGTON, DC – As Earth turns to the first day of spring on Sunday, March 20, climatologists predict a continuation of an April-June trend of warmer temperatures across most of the United States, from the desert to the southwest to the East Coast and north across the Midwest to the Canadian border, and a prolonged and persistent drought in the West where below average precipitation is still expected this year.

This is according to the annual report of the National Oceanic and Atmospheric Association Spring Outlook Reportwhich does not specifically cite climate change due to global warming due to the burning of fossil fuels for energy, although this is implied throughout the report.

A short-term drought has recently developed in an area stretching from North Carolina south through parts of Florida, and dry conditions will bring a high risk of wildfires to the southern plains. west and south and north to the central plains, especially when high winds are present, according to NOAA’s Climate Prediction Center, part of the National Weather Service.

“Drought conditions in the southwest are unlikely to improve before the onset of the late summer monsoon rains,” the report said. 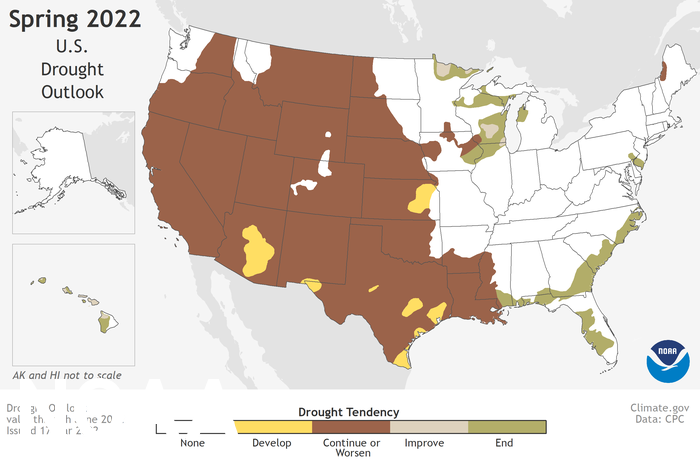 This map shows where there is greater than a 50% chance of drought persistence, development or amelioration based on short- and long-term statistical and dynamical forecasts between March 17 and June 30, 2022.

“Severe to exceptional droughts have persisted in parts of the West since the summer of 2020 and the drought has spread to the southern plains and lower Mississippi Valley,” said Jon Gottschalck, branch chief of operational forecast from the NOAA Climate Prediction Center. “With nearly 60% of the continental United States experiencing minor to exceptional drought conditions, this is the greatest drought coverage we have seen in the United States since 2013.” 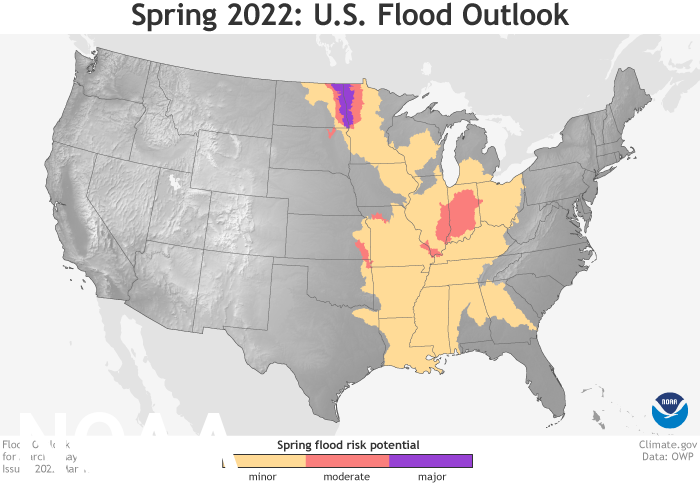 This map shows where there is more than 50% chance of moderate or minor flooding from March to May 2022.

“Due to late fall and winter precipitation, which has saturated soils and increased flows, major flood hazard potential is expected for the Northern Red River in North Dakota and potential for ‘Moderate flooding for the James River in South Dakota,’ said Ed Clark, manager. , NOAA National Water Center.

Spring snowmelt in the western United States is unlikely to cause flooding.

NOAA produces seasonal outlooks to help communities prepare for weather and environmental conditions likely to occur over the coming months to minimize impacts on lives and livelihoods. Heavy rains at any time can lead to flooding, even in areas where the overall risk is considered low. The intensity and location of precipitation can only be accurately predicted in the coming days. Therefore, the risk of flooding can change quickly.

Keep up to date with flood risk in your area with the latest official watches and warnings at weather.gov. For detailed hydrological conditions and forecasts, visit water.weather.gov.

What the new GCSE on global warming should teach

Covid has worsened the fight against global warming: Bhupender Yadav

DST must invest in sectors that contribute to global warming: Secretary