Liam Young is a speculative architect, product designer and director who operates in the spaces between design, fiction and futures. Young specializes in designing environments for the film and television industry, nurturing the belief that creating imaginary worlds gives us the ability to emotionally connect to the ideas and challenges of our future.

After centuries of colonization, globalization, economic extraction and endless expansionism, humans have remade the world from the scale of the cell to the tectonic plate. Young suggests in a TED Talk: “What if we radically reverse this planetary spread? What if we, as humans, reach a global consensus to withdraw from our vast network of cities and tangled supply chains into a hyper-dense metropolis that is home to the entirety of Earth’s population? 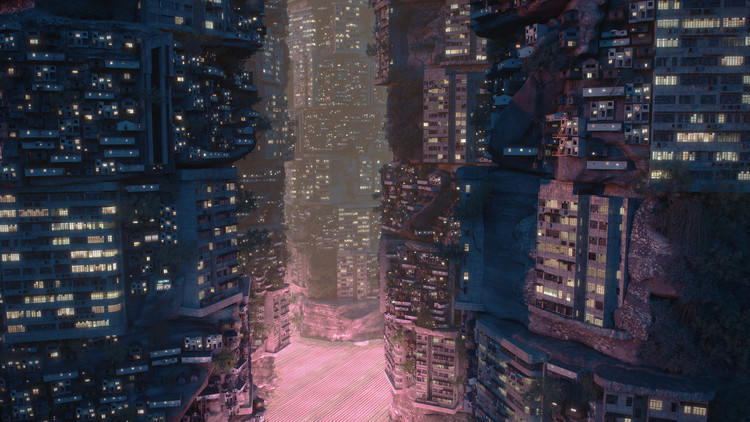 Thus was born Young’s thought experiment for this world called Planet City, an imaginary city, an exploration of the productive potential of extreme densification, calling 10 billion people to abandon the rest of the planet to a global wilderness. Young proposes that the entire population of the earth could live in this hyper-dense, self-sufficient metropolis that occupies only 0.02% of the earth’s surface, housing an area roughly the size of a state. average american.

Beyond the Human Scale: Designing for Ecosystems, Migration and Machines

Created in response to the rising red line on the climate change graph, the notion of worldbuilding and storytelling provides much more than just visualizing this data but dramatizes it. Therefore, in speculative cities, we can immerse ourselves in the various consequences of the decisions we are called upon to face today, told both through cautionary tales or roadmaps to an ambitious future.

Building Planet City becomes possible when we consider re-exploiting our old cities rather than virgin soils, thus avoiding having to consume or extract new resources. The global sea fleet that is currently scattering material ripped from the earth in our malls and storefronts could be reversed and repurposed to gather all of this material back into the geologic strata of a newly built city. The ghosts of nation states then give way to new neighborhoods formed around shared cultural practices as we interpret new myths of care, belonging and leisure.

Though wildly provocative, Planet City forgoes the techno-utopian fantasy of conceiving a new world order as a work of critical architecture comprising speculative fiction grounded in statistical analysis, research, and traditional knowledge. Imaginary worlds can be grounded in the actual science and technology of the present moment, empowering us to project ourselves into those futures. Avenues of exploration of how such a new world can evolve are being opened up, not in a singular forced movement, but in the guise of a slow, multigenerational retreat from the world we once knew.

Planet City is therefore not a proposal, but a provocation, a thought experiment. We don’t have to walk so hard on Earth, because the only thing stopping us from rethinking and consolidating our existing cities is ourselves, our own politics and biases, biases and blind spots.

In many ways, it’s almost like we’ve been living in a city on a planetary scale this whole time, especially as we’ve urbanized our planet from the scale of cell to plate tectonics. Planet City is both entirely fictional, but also already there. At the same time, a challenging image of a possible tomorrow and an urgent light on the environmental questions which are posed to us with full force today. Perhaps this is a call to actively visualize our possible futures, and perhaps those imaginary worlds in which we can collectively shape the direction of our city are the ones we should turn to.

This article is part of the ArchDaily topics: Cities and Living Trends. Each month we explore a topic in depth through articles, interviews, news and projects. Learn more about our ArchDaily topics. As always, at ArchDaily, we welcome contributions from our readers; if you want to submit an article or a project, contact us.

The agenda behind climate change catastrophism

The wisdom of water for climate change | Enterprise standard column

What does the US-China row mean for climate change? | Environment