This file photo taken on August 17, 2019 shows an iceberg calving with a mass of ice breaking away from the Apusiajik glacier, near Kulusuk (also spelled Qulusuk), a settlement in the municipality of Sermersooq located on the island of the same name to the southeast shore of Greenland. AFP

SINGAPORE – At the bottom of the world lies the wild Southern Ocean, where huge seas are whipped by westerly winds with names such as the Roaring Forties and the Furious Fifties.

But as remote and inhospitable as the frigid Southern Ocean may seem, it plays an outsized role in regulating the global climate and making life on Earth possible by acting as a huge heat sink and moderating the impacts of global warming.

The oceans absorb around 90% of the excess heat caused by human-induced climate change – with the Southern Ocean responsible for absorbing most of it.

But a study published June 28 in the journal Nature Climate Change said climate change could cause the Southern Ocean to absorb less heat, leaving more of it in the atmosphere.

“This would contribute to an increase in the rate of global warming,” said co-author Dr Agus Santoso of the University of New South Wales Climate Change Research Center in Sydney.

Dr Santoso and an international group of researchers led by Dr Guojian Wang of the Southern Hemisphere Ocean Research Center in Hobart used computer models to study how the Southern Ocean might be affected by changes in frequency and intensity of the El Nino-Southern Oscillation (Enso), a natural phenomenon in the Pacific Ocean that has major impacts on global climate.

Enso includes the warm El Nino phase and the cold La Nina phase. They are periodic events, with El Ninos usually having a stronger influence but lasting only about a year, while La Ninas can last longer, sometimes up to two years. The latest La Nina, which debuted in 2020, has only just ended.

El Nino is a warming of the ocean surface in the central and eastern tropical Pacific Ocean. This triggers heavy rains in parts of South America and hotter, dry weather in Southeast Asia and Australia. Strong El Ninos usually cause global temperatures to spike.

The concern is what impact climate change will have on Enso events and what this means for wind and ocean circulation patterns in the Southern Ocean.

Dr Wang told the Straits Times that if this increase in Enso intensity occurs in the future, “it would lead to a reduction in the efficiency of heat absorption in the Southern Ocean with more heat retained in the atmosphere, and would make our future world even hotter”.

The cold temperatures of the Southern Ocean make it particularly good at absorbing heat from the air.

Dr. Wang and Dr. Santoso explained that the Southern Ocean has a strong overturning circulation driven by the westerly wind, with an upwelling branch in its south that brings water from deep layers of the ocean to the surface.

A process called the Ekman Transport moves upwelling water north before it is returned to the deep ocean.

This circulation has allowed the Southern Ocean to be responsible for 60-90% of global ocean heat absorption since 2006, the authors said.

“El Nino tends to be stronger than La Nina and a consequence of Enso’s higher projected variability would be a northward shift of the circulation, i.e. less efficient heat absorption in the long term. “, said Dr. Santoso.

He added that it was not clear how much warmer the world could get if the Southern Ocean’s heat absorption weakened, and further study would be needed on its direct impacts on Asia. from the South East.

But models show that a warmer world is likely to bring warmer temperatures and higher rainfall to the region, as well as more intense droughts, Dr Santoso said. 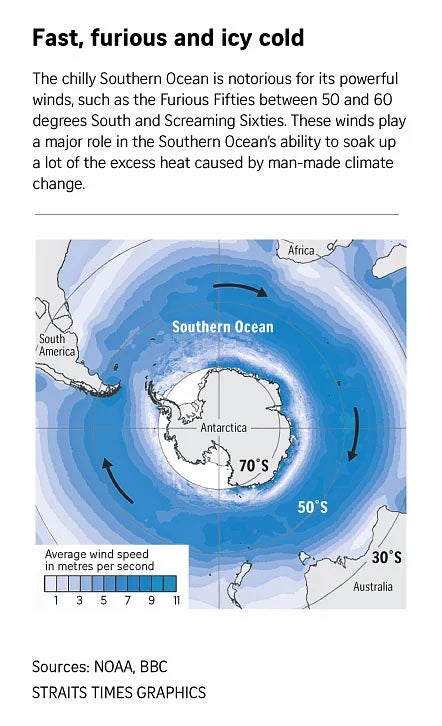 Associate Professor Koh Tieh Yong of the Singapore University of Social Sciences, who was not part of the study, said the research was important for understanding how changes in the strength of Enso events could influence climate change at long term for the atmosphere.

He also said it was still unclear what would happen if the Southern Ocean’s heat absorption weakened.

“If this residual heat is less near the surface, more in the upper levels, global warming may be less, not more,” Professor Koh, a meteorologist and climatologist, told ST.

He also noted that computer model responses in terms of changes in Enso intensity per degree of global warming were highly uncertain and different between models.

“Thus, projections of heat absorption from the Southern Ocean and warming of the entire atmosphere are also uncertain,” he said.

Nevertheless, research shows the vulnerability of the Southern Ocean to changes in wind and ocean circulation patterns triggered by global warming.

Other recent research has shown that, for now, the Southern Ocean also remains an important carbon sink.

A NASA-sponsored study published in December last year found that the Southern Ocean is absorbing more carbon from the atmosphere than it is releasing, further confirming that it is a important buffer against climate change.

Climate change is behind the extreme heat and floods of 2022

The economic imperative to act against climate change

The UN will publish a handbook of solutions to climate change

global warming: Climate change: the protection and restoration of ecosystems are the essential basis for human prosperity and well-being

Global warming at work: July was the hottest month of nights in US history