Misleading article about the effect of cow emissions on global warming

An article shared tens of thousands of times on social media claims that gas from cows is not responsible for global warming because the carbon they emit was already in the atmosphere. It is misleading; While scientists say some calculations have distorted the effect of methane on global warming, studies and data show that cow emissions contribute to climate change.

“Cow emissions are part of a closed, self-complete carbon cycle in the atmosphere,” says a Facebook from June 5, 2022 Publish titled “The War on Beef”. “The believer/activists fail to explain that when a cow eats a plant, it vicariously “eats” carbon from the atmosphere. They don’t explain that when that cow exhales carbon dioxide or spits out methane, the carbon from those gases goes back to where it ultimately came from, the air around them.”

The text is part of a article on a website called Farmers Against Misinformation. This implies that cows have a negligible effect on the climate since no new carbon is created when they emit gases.

“Cows convert carbon dioxide into methane, which is a much more potent greenhouse gas than carbon dioxide as long as it remains in the atmosphere,” said Myles Allen, professor of geosystems at the University of Oxford. “So the fact that the carbon atoms in methane come from the atmosphere in the first place is totally irrelevant.”

However, while Allen said “the contribution of cows to global warming is indeed well documented”, it is also “very poorly understood”.

“While there are a lot of misleading things in this article, I can understand why farmers are frustrated because there is so much equally misleading information that exaggerates their impact,” he told the newspaper. ‘AFP in an email.

Measuring the impact of methane

Scientists say methane emissions, along with other greenhouse gases, must be reduced to limit the average rise in global temperatures to 1.5 degrees Celsius – a threshold to avoid the worst impacts of climate change. Much of this methane comes from agriculture.

Data compiled by Climate watch, a platform run by the World Resources Institute, indicate that around 17% of global greenhouse gas emissions are made up of methane. About 40% of man-made methane emissions come from agriculture. 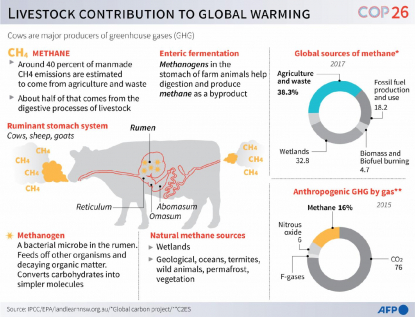 However, measuring the contribution of methane to global warming is another matter.

Methane is a more powerful gas than carbon dioxide (CO2), but it stays in the atmosphere for a shorter period of time – about a decade. As the Farmers Against Misinformation article notes, methane breaks down into CO2 and water in the atmosphere.

While scientists agree that methane contributes to global warming, its different behavior and dispersal rate complicates efforts to calculate methane’s overall contribution to global warming compared to other greenhouse gases.

Methane measurements are often expressed as “carbon dioxide equivalent” volume. This figure incorporates the “global warming potential” (GWP), a measure of the amount of energy absorbed by one tonne of gas relative to one tonne of CO2. GWP is usually measured over 20 years (GWP20) or 100 years (GWP100).

However, scientists have warned this measurement can distort the impact of methane. 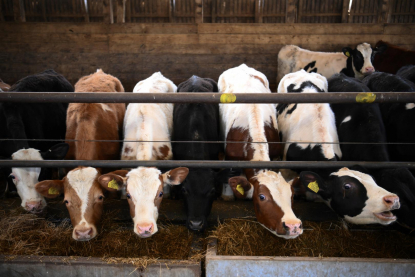 Livestock are the biggest source of agricultural methane, according to the UN Environment Program (AFP/Daniel Leal)

“The GWP100 may overestimate or underestimate the impact of methane emissions depending on the historical trajectory of these emissions,” explains a article published by Environmental Research Letters.

This in turn causes misconceptions about the effect of livestock emissions and how to deal with them, Allen said.

Scientists have developed a new calculation method known as GWP*, which takes into account the high impact and rapid dispersal of short-lived greenhouse gases such as methane. However, the militant group Greenpeace has accused the beef industry lobby that seeks to use GWP* to evade measures to reduce emissions.

At last year’s United Nations Climate Change Conference in Glasgow (COP26), countries agreed to reduce methane emissions by 30% by 2030. However, notable emitters including China, Russia, Iran and India have not signed on.

Allen, co-author of several studies on measuring methane warming effectsent to AFP graphics from the Environmental Change Institute (ECI) at the University of Oxford which show how reducing agricultural emissions could help limit global warming.

The graphs use data from PRIMAP-hist, a comprehensive greenhouse gas emissions dataset. They indicate that an increase in gas emissions from agriculture since 1850 has led to a corresponding increase in associated warming. 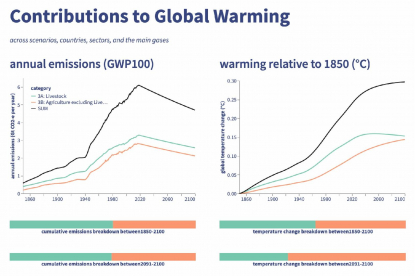 The bars at the bottom left of the graphs show that livestock accounted for about half of agricultural sector emissions over the same period.

“Right now, the number of livestock around the world and the associated methane emissions are increasing, causing significant global warming,” Allen said.

However, he said countries “do not need to reduce methane emissions to zero to prevent methane from causing further global warming”. ECI charts, for example, indicate that reducing greenhouse gas emissions from agriculture by 0.3% per year would help stabilize their associated share of global warming.

“It would be enough to start reducing them by about 3% per decade, or halving over 200 years,” Allen added. “Methane emissions that fall faster than 3% per decade are actually reducing global temperatures.”

“Agriculture clearly has an important role to play in achieving our climate goals,” Allen said. “But as long as we continue to treat methane as ‘equivalent’ to a certain amount of CO2 when it clearly isn’t, farmers will continue to feel unnecessarily threatened and misrepresented.”

SCOTUS opinion considered a setback in the fight against global warming

The western suburbs are mobilizing to fight against global warming

Limiting global warming to 1.5°C would reduce risks for humans by up to 85%