Hanoi (VNA) – The United Nations Development Program (UNDP), in collaboration with the Climate Change Department of the Ministry of Natural Resources and Environment (MONRE), launched on 1 November a special report entitled “Youth for the climate action in Vietnam 2022”.

This year’s report was co-authored by 24 young authors from across the country. It contained four key themes, including youth in climate policy and decision-making processes, accelerating the transition to a circular economy, mitigating climate change towards net zero, adapting to climate change and reducing disaster risks.

The authors documented and tracked over 130 youth-led climate initiatives and projects that were outstanding good practices of meaningful climate action. They also identified several priority accelerators moving forward, including the creation of a youth climate policy task force, education and capacity building programs on climate change, and financial and technical support. youth-led projects.

According to the special report, young people face two major barriers: financial limitations and a lack of knowledge and technical skills. It also recommends accelerators, such as the development of a climate finance center for young people, the promotion of the role of young people in climate governance and diplomacy, and the creation of a set of specialized publications for young people.

At the event, the young people also presented their youth statement in which they called on the government to prioritize investments in renewable power plants; establish the roadmap to phase out fossil fuels by 2030; prevent financial institutions from investing in high-emitting projects; and minimize the use of single-use plastic products with the goal of phasing out such products completely by 2030.

They suggested that local governments and stakeholders should involve young people in organizing communication and awareness campaigns on climate change, the promotion of ecological lifestyles and action resilient to climate change. Priority should be given to the creation of a task force on youth and climate policy to represent the voice of young people in national and international political forums, they added. 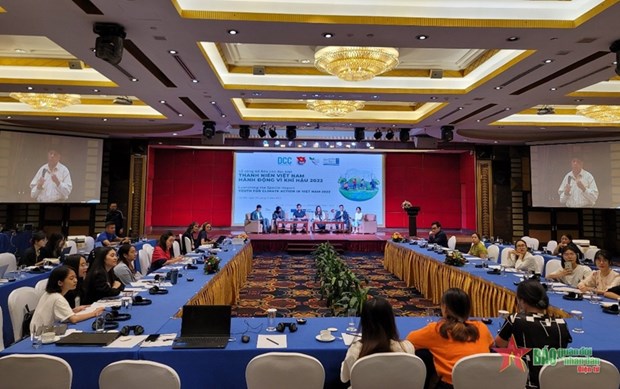 In her remarks at the event, Ramla Al Khalidi, Resident Representative of the United Nations Development Program (UNDP) in Vietnam, said that UNDP calls on all development partners to come together to facilitate and advance a environment in which youth can rise to fully assume their role as agents of change.

“We are committed to supporting Vietnamese youth, ensuring their concerns and ideas are heard, and continuing to work with young people to harness their creativity to drive climate action,” she said. declared.

“It is not only our interest but also our obligation to ensure that young people and future generations can live in a just, green and resilient future.”

According to Tang The Cuong, Director General of the Department of Climate Change, the launch of the special report, which takes place before the 27th United Nations Climate Change Conference (COP27), is of great significance, contributing to the voice of the Vietnamese youth in global climate response.

“We hope that agencies and organizations will create more conditions for Vietnamese youth to participate and contribute to the nation’s efforts to respond to climate change in order to accelerate the realization of the net zero emissions goal by 2050,” he said./.

Plants teach their offspring how to adapt to climate change, scientists say