CANAZEI, Italy AFP) – Italy’s prime minister on Monday linked the collapse of the country’s largest alpine glacier to climate change, amid hopes of finding more survivors of a disaster that killed at least seven people s is faded.

Eight people were injured and 14 others were missing, authorities said, warning it was unclear how many climbers were captured when the glacier gave way on Sunday.

Ice and rock tumbled down the Marmolada, the highest mountain in the Italian Dolomites, at 300 kilometers per hour (185 miles per hour), according to the head of the province of Trento, Maurizio Fugatti.

Disaster struck a day after a record temperature of 10 degrees Celsius (50 degrees Fahrenheit) was recorded at the top of the glacier, the largest in the Italian Alps.

Prime Minister Mario Draghi said it was “undoubtedly linked to the deterioration of the environment and the climatic situation”.

Alpine Rescue spokeswoman Michela Canova told AFP that an “avalanche of snow, ice and rocks ‘hit an access path at a time when there were several rope parties,'” some of which were taken away”.

She said the total number of climbers involved was “not yet known”.

The civil protection agency said there were four cars missing at the base camp: two Czechs, one German and one Hungarian.

Rescuers search for victims of the Punta Rocca glacier avalanche in Canazei, in the Italian Alps in northern Italy, Monday July 4, 2022, a day after a huge chunk of the glacier broke off, sending an avalanche of ice, snow, and rocks on hikers. (AP Photo/Luca Bruno)

“I heard a roar, turned to my left and saw a mass of ice coming down the mountain,” ski instructor Luca Medici, 54, told AFP.

The bodies extracted from the ice and the rock were taken to the village of Canazei.

A physical search for the scene of the disaster was impossible on Monday due to fears the glacier was still unstable and helicopters could only fly part of the time due to bouts of bad weather.

Footage of the avalanche filmed from a nearby shelter shows snow and rocks rolling down the slopes of the mountain.

“It’s a miracle that we are alive,” Stefano Dal Moro, an engineer who was hiking with his Israeli partner, told Corriere della Sera.

“There’s no point in running. You can only pray that this does not happen to you. We crouched down and hugged each other as the ice went by.

“The current state of the glacier is something we expect to see in mid-August, not early July,” he said.

Glacier specialist Renato Colucci told AGI the phenomenon was “bound to repeat itself” because “for weeks temperatures at high altitudes in the Alps have been well above normal values”. 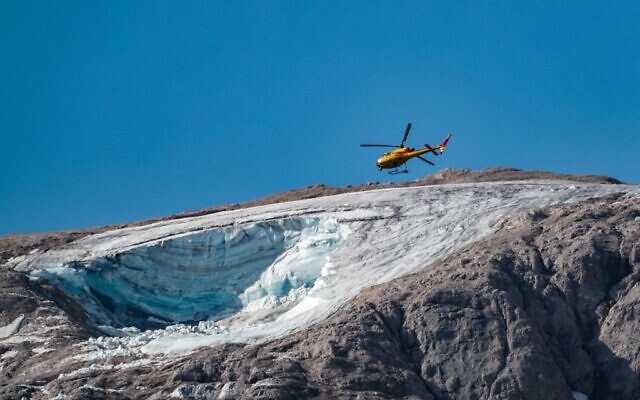 A rescue helicopter flies over the glacier that collapsed the day before on the mountain of Marmolada, the highest in the Dolomites, on July 4, 2022 (Pierre TEYSSOT / AFP

Recent warm temperatures had generated a large amount of water from melting glaciers. It had collected at the bottom of the block of ice and caused it to crumble, he added.

Pope Francis tweeted his prayers for the victims, saying climate change-induced tragedies like this “must compel us to urgently seek new ways of respecting people and nature.”

The Trento public prosecutor’s office has opened an investigation to determine the causes of the tragedy.

UN scientists from the Intergovernmental Panel on Climate Change said in March that melting ice and snow were among the top 10 threats caused by global warming, disrupting ecosystems and infrastructure .

Supporting The Times of Israel is not a transaction for an online service, like subscribing to Netflix. The ToI Community is for people like you who care about a common good: to ensure that balanced and responsible coverage of Israel continues to be freely available to millions of people around the world.

Of course, we’ll remove all ads from your page and you’ll have access to great community-only content. But your support gives you something deeper than that: the pride of joining something that really matters.

Join the Times of Israel community Join our community Already a member? Log in to stop seeing this

You are a dedicated reader

We’re really glad you read X Articles from The Times of Israel over the past month.

That’s why we started The Times of Israel ten years ago – to provide discerning readers like you with must-read coverage of Israel and the Jewish world.

So now we have a request. Unlike other media, we don’t have a paywall in place. But since the journalism we do is expensive, we invite readers to whom The Times of Israel has become important to support our work by joining The Times of Israel community.

For just $6 a month, you can help support our quality journalism while benefiting from The Times of Israel WITHOUT ADVERTISINGas well as access Exclusive content only available to members of the Times of Israel community.

Thanks,
David Horovitz, founding editor of The Times of Israel