Coastal erosion in the Arctic: an aggravating effect of global warming

Arctic coastlines have been eroding at high rates in recent years. Carbon pools in permafrost regions are vast reservoirs that are extremely vulnerable to the impacts of climate change. The thawing of permafrost, combined with a rise in sea level, further aggravates coastal erosion and amplifies global warming. While erosion rates vary from place to place, an increase in the frequency of extreme events can lead to the erosion of 30 to 40 m of coastline each year. Here is how climate change causes coastal erosion in the Arctic and the catastrophic consequences of this phenomenon on the environment.

What is arctic permafrost?

Arctic and subarctic regions store large amounts of organic carbon and ground ice – collectively referred to as permafrost. These permanently frozen landscapes generally remain well protected during winters, when the sea ice temperature is below freezing, thus keeping the ground frozen and stable. During the summers, the melting of the pack ice and the thawing of the permafrost destabilize these same landscapes. Cliffs and frozen ground become susceptible to rising open water, increased storms, and wave heights. In addition to rising air temperatures, most of these factors have modified arctic coastal morphologies over the past decades, making them vulnerable to erosion and negatively affecting infrastructure and ecosystems.

How does Arctic coastal erosion contribute to global warming?

High-latitude regions of Earth have experienced amplified warming, with temperatures rising about 0.6°C every decade for the past thirty years, twice as fast as the global average. Northern permafrost areas absorb organic carbon and are estimated to store around 1.7 trillion tonnes. Over the past few decades, studies have suggested that carbon storage in arctic and subarctic regions up to 3 meters (9.8 feet) deep in the ground, well below the traditional carbon accounting zone. Indeed, in the past, deeper measurements were generally rare and there were several uncertainties surrounding the estimation of this carbon pool.

Permafrost carbon in soils provides the basis for the release of greenhouse gases into the atmosphere, but the rate and extent at which this occurs is controlled by the overall decomposability of organic carbon. Among the factors that control the decomposability of these cold soils are the concentration of saturated oxygen in the soils and the accumulations of sediments, especially in permafrost regions characterized by wetlands, lakes and waterlogged soils. 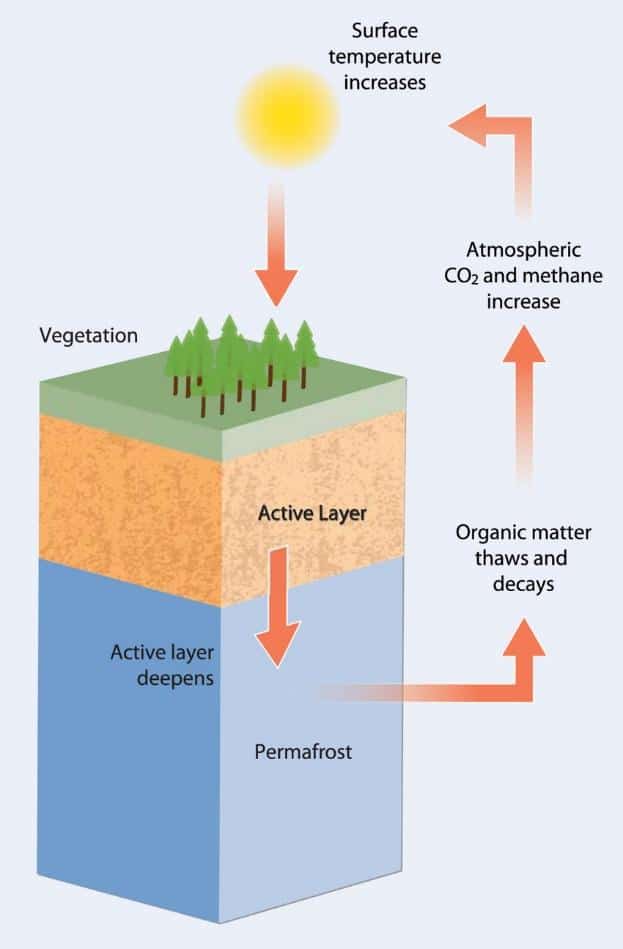 Figure 2. The permafrost carbon feedback is an amplification of surface warming due to the thawing of organic matter in permafrost soils, which breaks down over time and releases carbon dioxide and methane into the atmosphere. Photo retrieved from IOPscience.

As permafrost thaws, organic matter and carbon undergo microbial decomposition, a process by which greenhouse gases such as carbon dioxide and methane are released into the atmosphere. This feedback further amplifies global warming, with environmental and economic consequences. Now, the critical question here is: how fast is this happening?

The answer depends on the degree of climate change on decadal to secular scales and spatial variation across the landscape, which refers to aerobic or anaerobic activity and the amount of carbon and ice present in soils. Most direct emissions come from thaw subsidence on land. Sudden collapses of frozen blocks from steep coastal cliffs into the ocean are also common, which can exaggerate the release of carbon dioxide. Otherwise, Coastal ocean dynamics also play a role in organic matter degradation. In the event of sudden thaw and coastal erosion, organic carbon is released into the oceans and remains suspended in the water column. This permafrost carbon released in littoral zones undergoes one of several processes: it can be deposited in marine sediments, be transported offshore by winds and waves and undergo mineralization or it can potentially spread to the ocean. atmosphere in the form of greenhouse gases. Mineralization and transport can further enhance the effects of global warmingfacilitating positive carbon feedback.

In addition to the dubious fate of eroded carbon in these regions, the impacts of climate change are expected to cause further problems in the future. In the middle of the 21st century, the Arctic is most likely to be completely ice-free during summer. While smaller sea ice covers mean increased productivity, there is still uncertainty about nutrient availability in the Arctic. At the same time, warmer and cooler arctic waters can reduce carbon dioxide sink activity. Therefore, this modest balance between these processes can determine the net effect of future coastal erosion in the Arctic and can also help in understanding the carbon cycle. 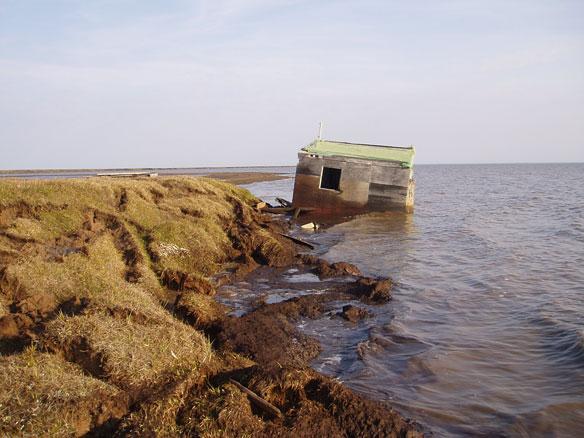 Figure 3. A cabin in arctic Alaska seen washed into the ocean because the cliff it was built on was eroded by rising sea levels. photo by USGS.

The future of the arctic carbon cycle

A high proportion of Arctic residents live along coastal areas, and many derive their livelihood from terrestrial and coastal marine resources. In addition, the Arctic itself is a dynamic region of industrial, commercial, tourism and military developments. Therefore, the socio-economic consequences of a highly dynamic landscape will primarily become a recurring theme in the short and long term and will have a major influence on the decision-making and adaptation planning of local government bodies.

For example, let’s look at the remote village of Yupik in Newton, Alaska, located in an area of ​​highly variable permafrost along the Bering Sea. It is estimated that Newtok and another nearby Kivalina village will go under water in the next decade due to significantly high erosion rates along low cliff areas that have prompted relocation efforts in recent years. Federal, state and local officials supported favoring the development of housing, energy and an evacuation center. Alaska’s Division of Community and Regional Affairs (DCRA) has launched the Alaska Climate Change Mitigation Program, which will address risk mapping assessments and community planning processes, which also include feasibility studies on relocation sites.

In the Beaufort Sea region of Canada, another hamlet has a serious problem facing its shores. With rising temperatures and rising sea levels, the community of Tuktoyaktuk in the Northwest Territories faces extreme risks of coastal erosion. With the reduction of Arctic sea ice, larger areas of open water and waves remain longer compared to previous decades. The coastline is eroding at a rate of 2 meters (6.6 ft) per year and is at high risk of breaching over the next two decades, exposing the harbor to higher waves and increased erosion. In 2020, the federal government announced US$5.5 million in funding for climate change adaptation strategies and clean energy projects in the region, of which US$3.6 million will go towards the consolidation of the littoral. These activities involve building more roads and installing concrete mats along the shoreline. Scientists and research teams have also taken measures to protect the coastline by growing local plant species as vegetation mats that can combat permafrost by keeping the ground cold and intact.

Significant developments in satellite imagery and airborne platforms have led to more accurate, frequent, and extensive mapping of permafrost coastlines due to the increased spatial and temporal resolution of satellite data. More readily available data on sea ice, climate dynamics, and permafrost conditions have increased our ability to better model and create future coastline movements and their impacts on infrastructure.

In recent years, the collaboration of several national and international scientific networks has led to a better understanding of Arctic coastal dynamics. Our current dilemma has focused on environmental and social changes, and this implies a greater need for international collaboration between researchers, governments, local agencies and societies to focus on permafrost coasts and coastal erosion. of the Arctic in the years to come. Such developments certainly create a sense of hope and hold promise for the study of future changes in coastal permafrost dynamics and influence on natural and built environments.